The Shape and Size of The Void Thoroughly Effect Heat Generation.

The more spherical the void, the higher the internal pressure - temperature upon collapse.

spherical or uniform in size.

and size of chemically gassed voids. As a consequence, detonation performance and

​consistency in the explosives is sacrificed.

phase which diminishes detonation. Worse yet,

Chemically gassed emulsions are easier and cheaper to make, transport, and store.  However, the loss of performance, safety,

and control is seldom worth the savings. 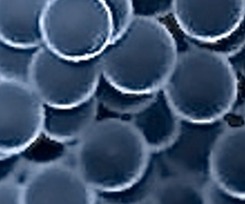 During the primary phase of detonation,

the voids are rapidly compressed; creating  extremely high temperatures. This causes the emulsion to decompose to a gas state.

Voids are typically applied by chemical

Unlike chemical gassing, microspheres are

not effected by time, temperature, or depth.

spherical void in the emulsion than the gassed